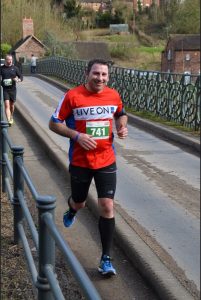 Garry Godsall, Construction Manager at J.Harper & Sons (Leominster) Ltd and who been with the company since 2008 is taking on his first marathon this year for a cause close to his heart. Garry, who previously served in the armed forces for nine years is set to run the 2017 Virgin Money London Marathon to raise funds for the Royal British Legion in support of service personnel, veterans and their families.

This will be the first time Garry has run the prestigious Marathon and was fortunate to obtain a ballot place on his fourth attempt. Garry hopes to raise £500 which will help the Legion provide vital support to the Armed Forces community, including holiday breaks for those recovering from an illness or bereavement, employment and housing advice and recovery support.

Garry said “I am really excited about running the marathon because it has been on my bucket list since my operation for key hole surgery on my knee. Having served in the Armed forces for nine years the Legion is close to my heart and a fantastic charity.”

On behalf of everyone within the Harper Group of Companies, we wish Garry the best of luck and we’ll be cheering for you on 23rd April 2017.

We are very pleased with the completed houses and feedback from the agents and potential purchasers on the finishes has been very positive. We have found your site personnel, site managers and support team all to be very accommodating and only too wi…