On 20th March, J. Harper & Sons (Leominster) Ltd were thrilled to attend the Official Opening of new homes at Brunswick Street, Cheltenham, specifically aimed at Armed Forces Veterans and some people who were classed as homeless.

We welcomed Lord Ashdown former leader of the Liberal Democrats, and himself a former Royal Marine to the official opening.  Mr Ashdown praised Cheltenham Borough Homes and Cheltenham Borough Council, and said “I think it’s an astonishing achievement- if every local authority in the country built accommodation for 10 veterans in the country then it would go so far to solving what is a real problem for many people who have served their country.”

In total, there are five former soldiers, two former members of the Royal Air Force and two former Royal Naval personnel living in the flats.

We were commissioned by Cheltenham Borough Homes to demolish existing garages that fell into disrepair in Cheltenham City Centre and the construction of 8. No Apartments and 2 new 2 bedroom houses. 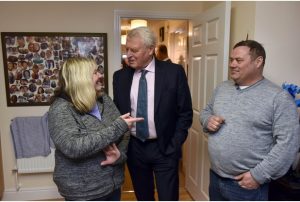 All units are tenanted by Cheltenham Borough Homes as affordable rent with the 3 ground floor apartments specifically let to ex servicemen and women. These units are fully D.D.A compliant and are fitted with wet rooms with remote control showers. To assist with access both the front and rear doors are fully automated with fob access.

Following the completion of the scheme we have had some very positive feedback regarding the great improvement it has made visually to the area and how it has helped bring new community to the road.

J.Harpers completed the scheme to a good standard and had a client focused approach. We were very pleased with the way the work was carried out on this tight site, located in the middle of our estate, and the care they look to minimise disturbance to… END_OF_DOCUMENT_TOKEN_TO_BE_REPLACED

Citizen New Homes Ltd are delighted with the completion of our new development ‘Chapmans Orchard’.  Working with J.Harper & Sons Ltd during the construction phase of this scheme and over course of its twelve month duration,  has proven to be an effe… END_OF_DOCUMENT_TOKEN_TO_BE_REPLACED

The Wrekin Housing Trust is pleased to announce that we have recently completed the development at Wendover Mews, Hills Lane, Madeley, Telford. The contractor was J. Harper & Sons (Leominster) Ltd and we are delighted with all aspects of their work i… END_OF_DOCUMENT_TOKEN_TO_BE_REPLACED

J. Harper & Sons has recently undertaken a new build rural housing project in Herefordshire on behalf of Two Rivers Housing. The site had its own unique challenges which were overcome with great skill ad care by the site team. The site was based with… END_OF_DOCUMENT_TOKEN_TO_BE_REPLACED

We are very pleased with the completed houses and feedback from the agents and potential purchasers on the finishes has been very positive. We have found your site personnel, site managers and support team all to be very accommodating and only too wi… END_OF_DOCUMENT_TOKEN_TO_BE_REPLACED

I confirm that Harper Group Construction Limited undertook the project at Wellington for Wellington Pharmacy Limited to an excellent standard, providing supervision, management and construction services for the project. Attention to the client’s re… END_OF_DOCUMENT_TOKEN_TO_BE_REPLACED

The scheme was completed on time, within budget and finished to a very high standard. As a result, I have invited colleagues and customers to visit and inspect the properties with complete confidence that they will be impressed with what they see. Wh… END_OF_DOCUMENT_TOKEN_TO_BE_REPLACED

Harpers Group Construction Ltd have been a pleasure to work with on this project, from the outset they have been accommodating to our needs.  The site team were always courteous and professional; their attention to detail has excelled all expectatio… END_OF_DOCUMENT_TOKEN_TO_BE_REPLACED

Harpers have done a great job throughout the scheme and have stuck to all promises that were made during construction. I would like to give a big thank you to Andy Loach (Site Manager) for his hardwork and dedication throughout the scheme. Also, to R… END_OF_DOCUMENT_TOKEN_TO_BE_REPLACED

Connexus are delighted that phase 1 is now complete and that our Beattie Avenue residents can move in to their new homes. We have also been able to provide additional homes for households who were on Herefordshire Council’s Accessible Homes Registe… END_OF_DOCUMENT_TOKEN_TO_BE_REPLACED