J. Harper & Sons (Leominster) Ltd were appointed as principal contractor for the construction of a single storey extension and associated internal adaptions to the occupied building, forming a new changing toilet and backstage facilities, together with associated external works.

The project was tendered on a Plan and Spec basis with no contingency and small items of provisional works, and despite this it was completed slightly below tender value with the project team working in unison to generate savings where over-expenditure had occurred. The single storey extension was situated on a very small area of land adjacent to the public highway, and with the building remaining in constant use site co-ordination with the subcontractor, material and client user groups was paramount.

“We were very pleased to have J. Harper and Sons Ltd work with us in completing Phase III of our project. The linking of the extension to the existing facility was complex and a high standard was achieved in all areas.”
– Geoff Vernon Chair, Festival Drayton Centre

The project situated in North Shropshire was fairly traditional in its form of construction, being of concrete block and beam floor, traditional brick and block superstructure and trussed roof, with materials being procured to match the existing Festival Drayton Centre being installed to a high level of quality. Funding was generated locally with a high level of interest demonstrated by the local community groups throughout the project.

The project demonstrates the ability to construct community buildings, including general adaptations and refurbishment, with external works being carried out on occupied buildings with a high level of management sympathy to the existing users. 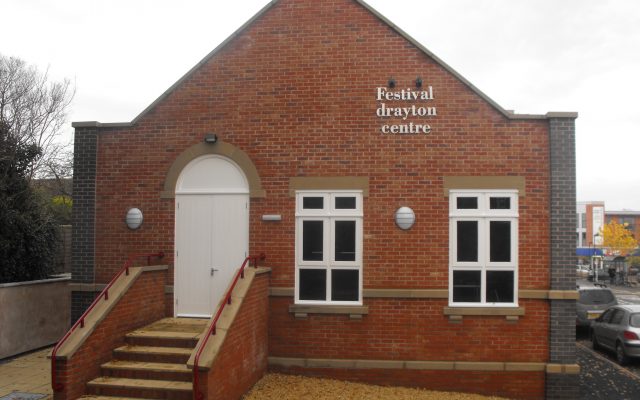 J. Harper & Sons have once again provided a first class service to Rooftop on the delivery of 23 no. affordable homes in Gloucester. The project team responded to all queries straight away and went above and beyond to assist the Association with quer… END_OF_DOCUMENT_TOKEN_TO_BE_REPLACED

Harpers Group Construction Ltd have been a pleasure to work with on this project, from the outset they have been accommodating to our needs.  The site team were always courteous and professional; their attention to detail has excelled all expectatio… END_OF_DOCUMENT_TOKEN_TO_BE_REPLACED

We are absolutely delighted with the extension to the Centre, the design, construction and finish are of the highest quality. From the outset, including the OJEU tendering process, the whole project has been completed to an unquestionable professiona… END_OF_DOCUMENT_TOKEN_TO_BE_REPLACED

I would like to pass on my thanks for the schemes completed recently at Hilton Road and Monmouth Drive. [The team] have coped really well and have delivered an excellent product of which the client and tenants are happy with. [We] really enjoyed w… END_OF_DOCUMENT_TOKEN_TO_BE_REPLACED

Connexus are delighted that phase 1 is now complete and that our Beattie Avenue residents can move in to their new homes. We have also been able to provide additional homes for households who were on Herefordshire Council’s Accessible Homes Registe… END_OF_DOCUMENT_TOKEN_TO_BE_REPLACED

J.Harpers completed the scheme to a good standard and had a client focused approach. We were very pleased with the way the work was carried out on this tight site, located in the middle of our estate, and the care they look to minimise disturbance to… END_OF_DOCUMENT_TOKEN_TO_BE_REPLACED

We would like to thank you on behalf of the children, staff and governors of Kingsland CE Primary School, for doing such a fantastic job refurbishing our toilets. The work was carried our swiftly and efficiently and with high standards of quality and… END_OF_DOCUMENT_TOKEN_TO_BE_REPLACED